Kratom is federally legal as we enter 2020, although the facts regarding the leaf are still misunderstood by most thanks to the propaganda spread by the FDA over the past couple of years. Thankfully there is an army of advocates on our side who have been working tirelessly to dispel the myths, address the outright lies, and to lobby against the baseless anti-kratom legislation that we’ve so unfortunately witnessed so far.

Thanks to the American Kratom Association, the Botanical Education Alliance, and kratom supporters like you, states are becoming aware of the Kratom Consumer Protection Act. The purpose of this proposed framework is to create and enforce a set of standards for kratom vendors to follow with the goal of making kratom safer.

This is clearly a more appropriate measure than criminalizing the distribution and possession of a botanical that has a history of hundreds of years of safe usage throughout its native regions. As of the time of this writing, versions of the Act have been adopted by Nevada, Utah, Arizona, and Georgia. Lobbyists are expecting to propose the law in 2020 to lawmakers in the following states: 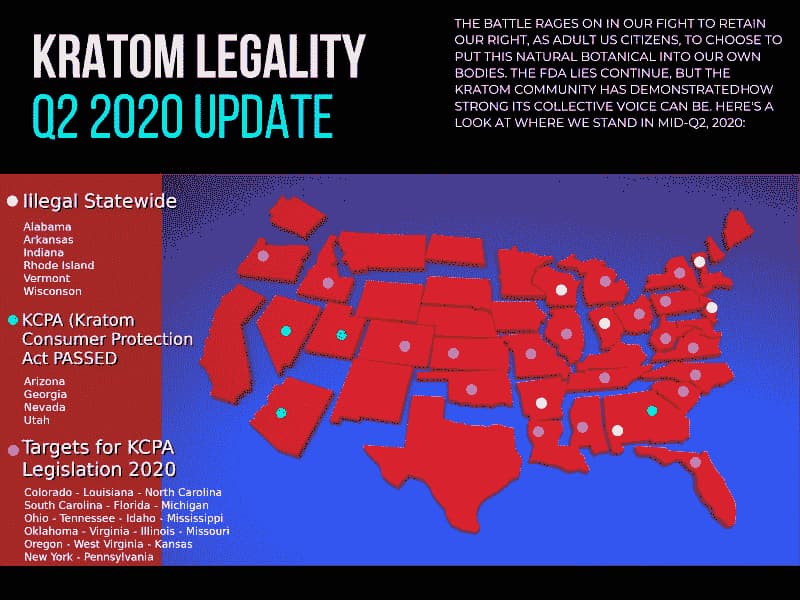 Kratom is completely legal everywhere listed here, though some areas restrict sales to anyone considered a minor. The exceptions within this group are Sarasota County, FL and San Diego County, CA, both of which consider kratom possession to be criminal. Unfortunately, residents of those jurisdictions no longer have the freedom to make their own decisions regarding this plant.

Four states have completely disregarded scientific fact and currently treat as a criminal anyone who possesses or distributes kratom. Those states are Arkansas, Rhode Island, Wisconsin, and Alabama. These states are all on the docket for 2020. Hopes are they will listen to sound reasoning and logic and reverse their stance on kratom, favoring legislation that encourages education and safety rather than denial and excision of freedom.

Here are the main tenets of the Kratom Consumer Protection Act (KCPA):

Widespread adoption of the KCPA would help reduce the amount of adulterated kratom products in circulation. These products are largely responsible for kratom’s bad reputation and have accounted for the legitimate reports of major negative medical events involving kratom. Unfortunately, the approach of criminalizing kratom does nothing but facilitate the spread of such products and drives others to recreational drugs.

In short, as of right now (January 7th, 2020), kratom possession is legal for adults across the United States with the exceptions of residents of: Arkansas, Alabama, Rhode Island, Wisconsin, Sarasota County, FL, and San Diego County, CA. Those interested in joining in the fight for our freedom to choose can learn more through the American Kratom Association.