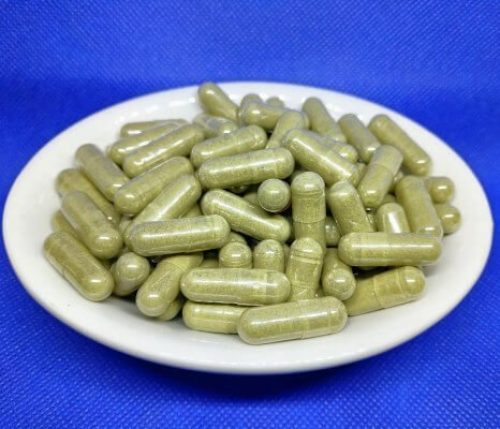 Green Maenglay is our very own Maeng Da and Malay blend comprised of optimal ratios of each and focused specifically on green vein kratom subtypes. We decided to start offering this as an inventoried stock item because we noticed that we were beginning to sell these more often as complimentary products within individual orders. Now you can experience the benefits of both classic strains in one premium organic blend.

Malaysian kratom is unique in its cellular structure as its plant cells tend to have thicker walls than other strains. How does this apply to actual effects for the end-user? The Malay portion of the mixture may take a bit longer to kick in compared to other strains, but its benefits can last about 20% longer. Approximately five hours or so for most. This is one of the several reasons we chose Maeng Da as its partner in this blend as MD strains are often felt within the first 50 minutes.

As far as effects go, our personal experiences consistently include a feeling of serenity with increased energy (which sounds contradictory until you try it), motivation to do things, decreased appetite, and a slight “afterglow” effect that seems to carry on a bit after the last of the normal effects are done. Despite the lift in energy there is no shakiness or nervousness to be felt, which in contrast with traditional stimulants for those who are sensitive.

To be clear, there is no established recommended dosage of any kratom type. As with virtually any food or substance, there is such thing as too much. An overdose of kratom can make a person feel nauseous. This effect can only be reversed with time, which could be a solid hour or two depending on how excessive the dose was. That said, those of us here at Socratic Solutions usually find between two and four grams to be our sweet spot.

These statements have not been evaluated by the Food and Drug Administration. This product is not intended to diagnose, treat, cure, or prevent any disease.

There are no reviews yet.

The vision of Socratic Solutions is a world in which credible information flows freely and every relationship is built on sustainability, trust, and mutual respect

Our objective is to empower discerning individuals to live the free, natural, happy life they deserve by providing organic, alternative solutions to life’s challenges in a consistent manner and at an unprecedented value.